Virtual Reality gets real for hospitality

As more hospitality operators take Virtual Reality seriously, they are discovering that its benefits and applications are far-reaching. Elly Earls reports

“I’ve seen four years of news articles that have said this is the year of VR; it’s become a bit of a joke in the industry,” says Dan Page, creative director of the VR World Congress and head of marketing, events and community at the recently-launched Bristol VR Lab.

“Because I’ve heard the same thing said again and again and again, I’m wary of over-hyping it, but I do believe we’re now past the stage of hype for the sake of hype. People are taking VR and AR a bit more seriously.”

Although it’s still early days for the hospitality industry, companies that have looked beyond the novelty value, thoroughly weighing up the benefits of immersive technology to their owners, customers and employees, have discovered useful applications for it across all aspects of their businesses – from design through to marketing, training and even increasing the empathy of their corporate staff.

Improving owner engagement
At IHG, using VR during the design development process is saving time and money as well as improving relationships with owners, particularly within its business travel brand Crowne Plaza, which is currently going through a refresh.

Previously the group had built physical pilot rooms to test design schemes, which generally cost in excess  of £100,000. Now, using immersive virtual reality, it has created a complete virtual concept hotel, which users can walk around and see how the design looks from any position – even under the bed. “Building in the virtual world costs significantly less with the benefit of quick and easy changes,” says Matthew Yates, brand design manager at IHG Europe.

“Instead of having flat renders, video, 360 and VR all produced separately, we now just produce one single 3D model using a virtualisation system called Unreal Engine. This means that every time we make a single design change we can instantly update all of the related design production assets: images, flythrough video, 360 virtual tours and VR – quickly and consistently.”

The biggest benefit IHG has seen from the programme so far is engagement with current and prospective owners. “There is significant investment from our owners in building and refurbishing hotels,” Yates explains. “Using Virtual Reality with our owner community has really helped build belief that the experiences and designs we are creating are all targeted towards enhanced guest experience.”

After asking a cross section of typical hotel guests to view and comment on a physical pilot guest room and the same room in VR, IHG has also discovered that there’s great potential to use VR as a tool for evaluating design work based on customer feedback. “There was a very strong correlation in the response to both rooms with similar comments from guests on what they liked, didn’t like or would want to see changed,” says Yates.

“This was an incredibly valuable piece of research as it has given us the green light to progress with our VR programme for design development. It has validated the results of current and future guest research where VR is the primary tool and reduced the requirement for expensive physical piloting programmes.” 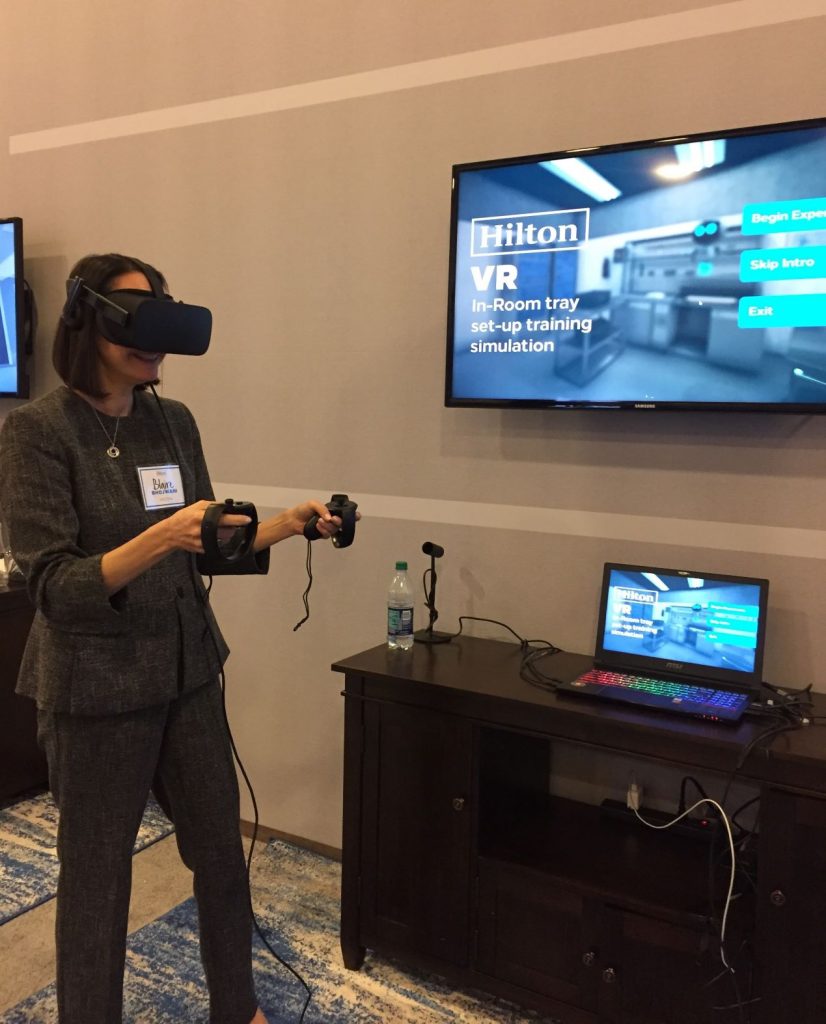 Building empathy
Hilton has taken a completely different approach to VR, using it to create immersive environments for its corporate staff designed to help them understand what day-to-day life is actually like for different hotel employees.

Once they’ve donned their Oculus Rift goggles, which are linked up to a high-end gaming laptop, they can not only go on a guided journey of the different departments of the hotel, from the restaurants and kitchens to the housekeeping area and the boiler room, they’re also invited to take part in three routine operational tasks: cleaning a guest room, building a room service tray and checking in rewards programme guests at the front desk. “We want them to realise that the job they do every day in their office can directly impact the life and work of hotel team members; the decisions they make can affect their work, their efficiency and the way they operate,” explains Blaire Bhojwani, senior director of learning innovation at Hilton.

The results of what was initially a pilot project, which involved 100 members of staff over two days, have been promising, with 87% of participants saying they now have greater empathy and appreciation for team members working in the hotel environment and 78% anticipating the experience will impact the work they do at the corporate office. “It’s about understanding that every time we think of one more thing, it lands on those team members to act it out,” Bhojwani says. “If we want to add something to a brand standard, we need to think about what we’re going to take away so as not to overwhelm and overburden them.”

The next step is to scale up globally and continue to measure the impact of the VR experience on corporate team members’ behaviour three, six or twelve months later. Bhojwani also believes there are many other potential learning applications for VR, from on-boarding to educating call centre employees and recruitment. “The reason we’re doing this isn’t to save travel dollars, but it certainly makes it more cost effective to have people experience hotels in their office versus traveling to a real hotel,” she adds.

Customer-facing VR
Of course, it’s not all happening behind the scenes, with the ultimate example of customer-facing VR in hospitality at Hard Rock Hotel Ibiza’s Sublimotion, where dinner comes in at around €1,500 a head and guests are treated to a multi-sensory, 14-course extravaganza, including a high-tech simulation of what a friend’s dinner party would look like in 2050.

“This technology has evolved a lot, and we have been making the most of it to make the experience of this scene more powerful each season,” says founding partner Eduardo Gonzales. In year one – 2014 – the  team used an ‘e-spoon’, which, when looked at, activated an augmented 3D animation around the snack giving guests nutritional information about what they were about to eat.

Today, we’re even closer to Black Mirror territory. “This year, we are using leap motion technology to totally immerse our diners, allowing our clients to use virtual hands to pick up real snacks and taste them in a completely virtual environment,” explains Gonzales. “To sum it up, it’s like you can eat real food inside a video game. The result is amazing!”

It can be viewed as a 360 video tour on a desktop or as an immersive virtual reality experience on headsets and so far the feedback from guests has been positive, particularly for brides-to-be planning their weddings.

For Sol Rogers, founder and CEO of virtual reality and creative production agency REWIND, it’s undeniable that immersive tours like this are a better way of selling a hotel than any other marketing material. “Rather than reading through reviews and scanning photos, which may or may not be trustworthy, it offers customers the chance to experience things for themselves, essentially allowing the hotel industry to benefit from ‘try before you buy’ marketing.

“Right now, 360 video is the most accessible format as it can be viewed on YouTube and Facebook. It’s also relatively cheap to produce and soon we’ll see it as the norm for hotel marketing.”

Starting small
The first question any hotelier should ask before thinking about getting started with VR is ‘Does this need to be in VR?’ advises Page. “There’s still a tendency to just do something for the sake of it because it’s a cool new technology but people shouldn’t use it for that reason because it leads to disappointment, confusion and misunderstanding,” he says. “You need to ask: Am I solving a problem that needs to be solved or am I creating a problem that doesn’t actually exist?”

Adds Rogers: “Many companies who were early adopters of VR were simply looking to claim the much coveted ‘world’s first’ VR this and that to benefit from the press and publicity. That era has ended. Simply being the first to do something isn’t going to be enough anymore. The content has to be both outstanding – executed to the highest level – and relevant. Putting bad content into VR isn’t going to make it good content. In fact, it will probably make it worse.”

Equally crucial factors to take into account are the budget, which needs to stretch not only to creating the virtual reality product, but also to the equipment required for guests, employees or owners to experience it, and selecting the right technology partners for the project. “Go to a VR conference and speak to people who know what they’re talking about,” Page suggests.

“Have a go at experiences and training simulations that are going on there. Visit a lab like Bristol VR Lab, which can point you in the right direction. Don’t go to a marketing company that will charge you over the odds to do something they will outsource; go straight to a VR company.” 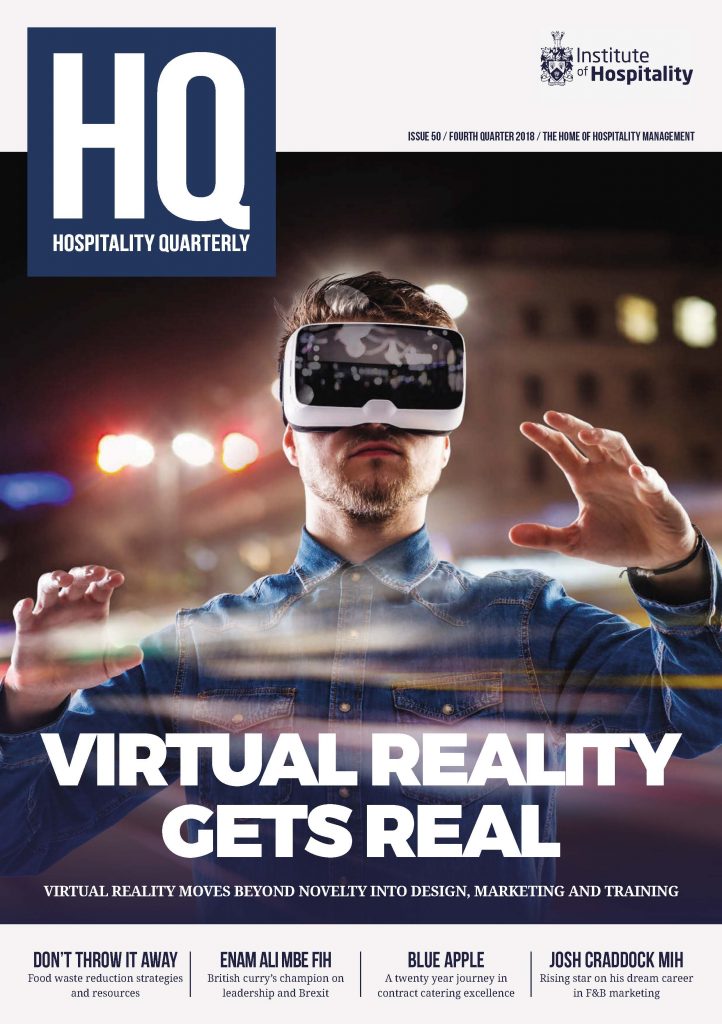 Most importantly, says Yates, don’t try and do everything at once. “Our approach has been to phase VR into our regular business processes. Once the technology is embedded, it then becomes business as usual,” he explains.

“Developing focused in-house expertise was important to direct the effort, ensuring that correct agency appointments were made and different agencies were working well together using the same technology. Start small with one specific project; learn and grow.”

This article was first published in HQ, the Institute of Hospitality’s quarterly management magazine. Written for mid-level and senior managers in all sectors of the industry. HQ is a benefit provided to members of the Institute as part of their annual membership subscription. They have free access to electronic articles from each issue of the magazine including past issues.