Study of 50,000 Sodexo employees finds teams with gender diversity achieve better results across the board

International services company Sodexo has found teams managed by a balanced mix of men and women are more successful across a range of measurements including employee engagement and health and safety.

The five-year study of 70 Sodexo entities across different functions represents 50,000 managers worldwide and tested the performance implications of gender-inclusive work culture. The study examined women across all levels of management – not just upper-level leadership positions – in order to investigate the “pipeline” that will ultimately affect gender balance at the top tier of businesses. 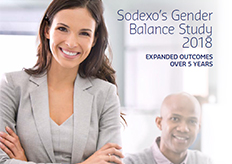 Sodexo’s study found that non-financial factors can also significantly benefit from a more equally structured leadership, with benefits including;

Gender-balanced entities saw the number of accidents decrease by 12 percentage points more than other entities.

Gender-balanced entities had an average client retention rate that was 9 percentage points higher than other entities.

The pattern of results indicated that a near-equal balance of men and women in management was critical to observing gains in financial and non-financial KPIs. Once the proportion of women in management exceeded 60%, the benefits plateaued, confirming that a mix between 40% and 60% is necessary for optimal performance.

Analysts also found a direct correlation between the percentage of women in the total workforce and those in management, indicating gender-balanced workforces and leadership create an environment supportive of career growth for women. This lends support to the idea that gender parity in top leadership is closely related to the pipeline of women in the workforce.

Sodexo, already a leader in diversity & inclusion, is breaking new ground in gender parity. Today, women represent 50% of its board. Thirty-two percent of senior leadership positions are held by women globally – a 6% increase at the very top levels since 2013.

Middle management and site management positions are balanced at 46%. Currently, 59% of the total workforce works within gender-balanced management.

The Sodexo Gender Balance Study originated in 2014 with Sodexo’s desire to improve its gender parity in leadership throughout the management of its 425,000 global workforce and to expand previous outside research on gender parity in the workplace.

The full report can be accessed here: http://bit.ly/2tmBIbm