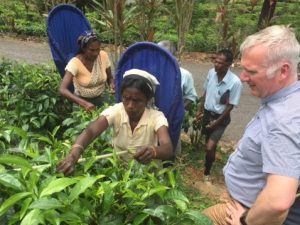 A whirlwind tour of Hope & Glory’s trusted tea gardens in Sri Lanka becomes a lasting voyage of discovery for Guy Hilton FIH, General Manager of The Waldorf Hilton. Mesmerised, he kept a diary.

They say March is the ideal moment to visit Sri Lanka. The weather is warm, the rain kept at bay on this historic, tea-growing island nestled in the Indian Ocean. So you’d think the Waldorf Hilton’s top man would jump at the invitation to join Bharat Chudasama, Hope & Glory’s Tea Master, on a whirlwind tour of Sri Lanka’s rambling tea country. Not the serendipitously named Guy Hilton, who only accepted after ‘great trepidation’, even if was, yes, a man on a mission.

‘I wanted to start our journey towards the creation of an individualised, private Waldorf Hilton Tea Blend, and I also wanted to really understand the journey from tea tree to cup. But it’s a long journey just to spend two and a half days in Sri Lanka,’ says the general manager of one of London’s most iconic hotels, established at the turn of the last century.

Bharat and Nina, on the other hand, were insistent, having worked closely with Guy since the hotelier had personally selected Hope & Glory as the Waldorf Hilton’s exclusive tea partner. Together, they’d managed to reinvigorate the hotel’s tea offering, with Guy and the rest of the management team down embracing Hope & Glory’s consultancy expertise. The results can be seen in everything from the quality of the teas (now all premium, organic and ethically sourced) to the fact that staff can now confidently advise the kind of vessel and brewing time needed to create the perfect cup of Organic Chaoquoing Green Tea. 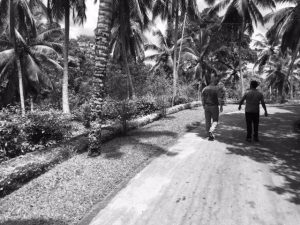 ‘Nina and I think it’s critical to take our partners to see where we source Hope & Glory, and how our teas are picked, processed and packed. We do want to take them on the same journey that we take ourselves several times a year, visiting our tea garden partners. That’s how they’ll get to understand Hope & Glory’s field to cup story, and we know ours is a special one,’ says Bharat.

But why Sri Lanka and not, say, China, the original birthplace of tea? ‘You can see quite a lot in a short space of time in Sri Lanka. The time difference is only four and a half hours, and the roads and infrastructure are relatively good and conducive to travelling from one garden to the next. Also, Sri Lanka is one of the top tea exporters in the world today,’ Nina explains.

Sri Lanka’s tea industry is certainly flourishing. A former British Crown Colony, what was then called Ceylon has benefited from a lucrative tea trade since the late nineteenth century. The British brought the first tea shrubs to the country from nearby India. Nearly fifty years earlier, the British were already cultivating tea in Assam, with shrubs first brought in from China. 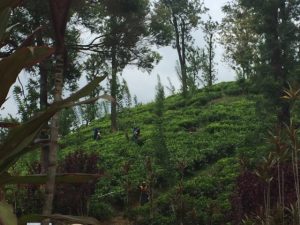 Once convinced, Guy caught the Saturday night flight from London to Colombo, now keen to follow Bharat’s carefully planned itinerary. Checking into the gleaming Hilton Colombo the following day, Sunday, there was time to relax and savour gold-rimmed cups of Ceylon Ginger Tea poured from heavy silver teapots. But at 5.30am on Monday, Guy’s journey would begin with an ‘exhilarating’ four-and-a half-hour taxi ride to the first of two high-grown, organic tea plantations.

Over the next two days, he kept a diary:

Morning. A visit to a medium-high grown garden at 1.2km above sea-level. It begins with a show round of the orthodox processing factory. It’s incredible to learn that even in this modern world, tea — apart from the plucking which we know — is prepared with so much human involvement and care. From the withering (the first moisture reduction process) to the drying drums, the sorters and graders and rollers, people, not machines or robots, were involved.

An incredible experience was then to pluck some tea with the experts — ladies who pluck a minimum of 20kg of tea leaves every day Their speed, knowledge and delicate touch is inspiring. To see them use a simple plastic pole to guide one towards what can be picked; to be able to understand the terminology of the ‘Mother Plucker’ (two leaves and a bud, one leaf and a bud, and bud only), really helps you to understand the tea journey and what the environment, human involvement and process adds to the ultimate final product and taste.

Afternoon. On to a ethically sourced facility near Kandy. The facility buys from small local growers and makes both green and black organic, Fairtrade tea. The opportunity to taste a truly unique single estate tea, a green and black tea grown at approximately 5000 feet capped the day for me. It was really a Champagne Tea. Late to the hotel, but inspired.

Drive to another plantation. Small diversion past the Monitor Lizard crossing the road, and then a real education into green tea. It’s organic. It’s FairTrade. It’s grown amongst mango, coconut, peppers, nutmeg, cinnamon and more.

The care and attention that goes into the production at this plantation is eye opening. The expertise and human involvement even more as its volumes are less than the plantation we visited yesterday. The drying process is completed when the producer feels the tea is at the right level of dryness.

The trip has really opened my eyes to the tea growing and producing process. The best teas are grown with a passion and level of detail that no piece of equipment can ever replicate. The pluckers’ delicate hands and depth of detail…the men who tend the plants and ensure the weekly, monthly, annual and four-yearly pruning, resting and plucking across hectares is incredible. The factory production and the care and detail that goes into the production is enlightening. The FairTrade, approach is so important; tea is an industry with its own labour challenges.

There is a real opportunity for a hotel like the Waldorf Hilton to truly differentiate its offering and allow our guests to experience a Tea Service not seen before. I would definitely like to take tea on the journey that champagne has been on. I am so excited with what lies ahead.

The success of Guy’s Sri Lanka trip sets a precedent for Bharat and Nina, who plan to undertake trips as often as three to four times a year with key partners in the future. Bharat says, ‘Hopefully, this is an approach that will not only enlighten those we take with us on the sheer level of effort that goes into producing great tea like Hope & Glory, but it will help transform them into ambassadors for tea and Hope & Glory advocates. It’s part of the tea revolution we want to lead, which also looks at sustainability. Tea is part of the infrastructure that sustains people in tea-growing countries like Sri Lanka. But we have to make sure that infrastructure is fair and sound.’ 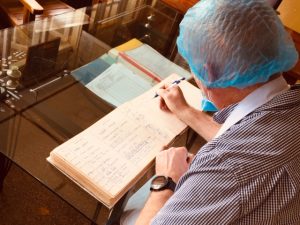 Adds Nina, ‘Guy wrote about wanting tea to go on the same journey as champagne. There’s always been demand for trips to vineyards where people can see how grapes are grown, cultivated, harvested and made into wine. What we did for Guy in Sri Lanka is not very different. It’s part of Hope & Glory’s vision to offer everything related to the tea experience, especially if clients want to create their own signature tea blend, like the Waldorf Hilton. They need to ‘own’ that tea.’

Are there Monitor Lizards in China?

Hope & Glory expresses its solidarity with the Sri Lankan people following the attacks at the Shangri-La Colombo and other sites last Easter. Our thoughts are with all the victims and their loved ones.

Interview and article by Gina McAdam

Hope & Glory have recently become a business partner of the Institute of Hospitality.