Michel’s son Alain and daughters, Francine and Christine, on behalf of the family said: “It is with deep sadness that the Roux family announces the passing of our beloved grandfather, father, brother and uncle, Michel Roux OBE. The family would like to thank everyone for their support during his illness. While many of you will share our great sense of loss, we request privacy for the family at this difficult time.

“We are grateful to have shared our lives with this extraordinary man and we’re so proud of all he’s achieved. A humble genius, legendary chef, popular author and charismatic teacher, Michel leaves the world reeling in his wake. For many, he was a father figure inspiring all with his insatiable appetite for life and irresistible enthusiasm. But above all, we will miss his mischievous sense of fun, his huge, bottomless heart and generosity and kindness that knew no bounds. Michel’s star will shine forever lighting the way for a generation of chefs to follow”.

There will be a private family funeral followed later in the year by a celebration of life event, details to be released in due course.

Tributes have been paid to the man described as ‘British gastronomy’s greatest modern champion’ from across the industry.

Michel Roux changed the face of hospitality in the UK when he and brother Albert opened Le Gavroche in London’s Lower Sloane Street in 1967. It became the first three Michelin-starred restaurant in Britain in 1982 and a beacon for excellence in the UK dining scene.

In 1972 the pair acquired the Waterside Inn in Bray, which was awarded three Michelin stars in 1985.

The brothers separated their business interests in 1986 with Albert taking over Le Gavroche and Michel heading up the Waterside Inn. He handed over the restaurant to his son, Alain, in 2002 – the same year he was awarded an OBE.

“A lot of what I do now is a continuation of what my father was working towards and what we worked towards together,” Alain told The Caterer in 2010. “He still comes in and tastes all my dishes to give feedback.”

The restaurant remains the only in the country to have retained three-Michelin-starred status for 35 years.

In 1984 Michel and Albert founded the Roux Scholarship competition, in which 50 young chefs compete annually to win three months’ experience in a UK or European three-Michelin-starred restaurant of their choice. It was hoped to inspire more young British chefs to raise their game, and change the perceptions European chefs had of the country’s cuisine. 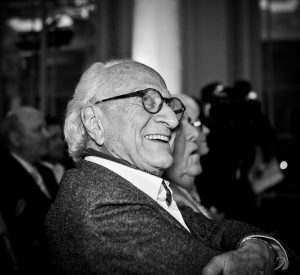 In an interview in 2013, Michel Roux explained: “We wanted to help them grow by placing them on stages in two- and three-Michelin-starred restaurants in France but whenever we contacted colleagues over there, their response to the idea of a British chef coming to their restaurant was always: ‘Is this a joke?’ It really annoyed me actually because there were some very talented boys who were ready to be developed further but nobody on the continent wanted to take them. The idea was that if somebody won a competition and became a Roux Scholar, it gave them enough credibility so the chefs in France would not be able to refuse them. It gave us the chance to prove to the continent that there were some really promising young chefs in Britain.

The competition has helped launch the careers of chefs including Andrew Fairlie, Sat Bains, Andre Garrett and Simon Hulstone. It is one of the industry’s most acclaimed chef competitions in the UK, with many scholars having gone on to win Michelin stars for themselves, and helping UK chefs gain international recognition.

Born in Charolles, Burgundy, in 1941, Michel Roux lived over his grandfather’s charcuterie before his family moved to Paris where his love for food was inspired by helping his mother in the kitchen. Aged 14, he was apprenticed to a grand pâtissier near Paris where he spent three years pursuing his craft.

Following a few years as a pastry cook at the British embassy in Paris, Roux was taken on as a commis in the kitchen of Cecile de Rothschild’s household, rising to be her youngest ever personal head chef, which he credited as a “life-changing experience” and his greatest influence.

Over the years the brothers have engaged in many industry enterprises, such as starting a catering service, which was bought by Compass in 1993, becoming Roux Fine Dining – with Albert as a consultant – and opening a number of restaurants and brasseries in London, including Poulbot Pub, Le Gamin, Gavvers, Les Trois Plats and Roux Britannia – which the brothers sold to focus on their consultancy work.

Roux met his wife Robyn in her native Australia in 1982, and soon after she moved to the UK and played an active role at the Waterside Inn, including overseeing the interior design and looking after the staff. She was described by Roux as his inspiration and support over their 35 years together before she passed away following a two-year illness in 2017.

He was also presented with the Chevalier dans l’Ordre National du Mérite by Président Valéry Giscard d’Estaing in 1987 and both he and brother Albert were awarded the Lifetime Achievement Catey award in 1995. Michel also opened Roux at Skindles in Bray in 2018 with son Alain.