The Northern Ireland Branch of the Institute of Hospitality hosted an inspirational conference on 17 September at Hastings Europa Hotel in Belfast to over 500 hospitality students. Marianne Hood FIH, Chair of the IoH Northern Ireland branch tells us more. 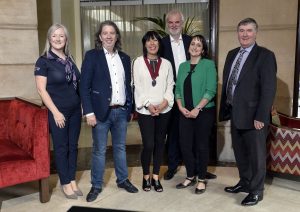 We got down to business very quickly after a short summer break and began planning the annual student conference. Known as ‘Home Grown and Growing’, the conference highlighted the endless opportunities for students to thrive in the exciting and expanding hospitality sector and provided an interactive platform for employers in the industry to directly and actively engage with students and educators.

Belfast is the number one city in the UK for hotel investment, with an additional 3,000 rooms anticipated by 2021 and an ambition to double the value of the tourism sector by 2020. Economic research shows the local hospitality sector will need to recruit an extra 2,000 chefs and will have 30,000 vacancies to fill by 2025 to cope with demand. With the recent opening of so many new hotels, bars, restaurants and venues in Northern Ireland, it clearly indicates how the hospitality sector is a growth industry and this conference highlighted the benefits of how the hospitality, tourism and leisure sector should be viewed as a career of choice and not the job of last resort as it once was.

For the first time ever, the Northern Ireland Branch worked in partnership with other industry bodies such as Tourism NI, Northern Ireland Hotels Federation and Belfast City Council; all agencies very much aware of the shortage of skills and the need to encourage our young people to consider their career opportunities. 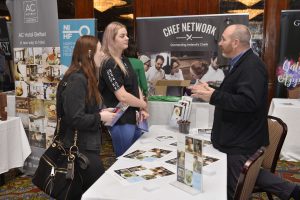 This was the largest student conference to date and over 500 students, from local colleges as well as Ulster University were welcomed on Tuesday 17 September. A job fair also took place affording students the opportunity to visit over twenty employer stands; employers who were promoting their venue and career prospects – many students left with crisp new application forms!

I opened proceedings and then students, educators and speakers were welcomed by local writer, broadcaster, producer and comedian Tim McGarry.

Ruth Hegarty of the Chef Network was the first speaker; the Chef Network brings together chefs in Ireland, from all sectors and at all stages of their careers – to communicate, collaborate, share and innovate. Their aims are to attract and retain chefs in the industry, improve standards of training, recognising the industry’s key role in this and encouraging greater collaboration with the education sector and to promote and maintain culinary skills.

Ruth talked about the importance of a Kitchen Workplace Charter which was developed by chefs for chefs and is based on 5 key principles, 1) build a positive and encouraging environment 2) nurture camaraderie and team spirit 3) promote learning and development 4) prioritise work life balance 5) give back to the chef community. Ruth’s key message to the students surrounded the importance of positive kitchen culture.

Immediate past chair of the NI Branch, Michael Cafolla spoke to the students on behalf of the NI Branch’s nominated charity; the Anthony Nolan Stem Cell Register, a charity that works in the areas of leukaemia and hematopoietic stem cell transplantation. Michael’s eldest son, Thomas, a 3rd year hospitality student had been diagnosed with Hodgkin’s lymphoma in 2017. Thomas had just begun his placement year when he began to feel unwell. After numerous treatments, he desperately needed a life saving stem cell donation and luckily Thomas was matched with a donor in late 2018. Michael explained the process of testing and donation and the branch were thrilled to discover that at least 10% of the attending students signed up to the register and completed a very simple swab test. 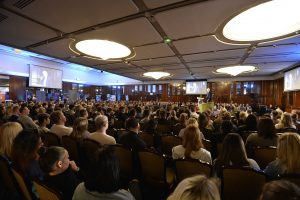 Aine Kearney from Tourism NI talked to the students about her role in delivering the largest event in Northern Ireland ever; The 148th Open Golf Championship. Aine drove home the importance of collaborative working and she explained that over 237,000 visitors were welcomed to Northern Ireland during the six-day event and that there was an estimated combined economic and media benefit of £80 million. Aine talked about how working in tourism and hospitality was being part of something special “A great industry with amazing opportunities”. “We’ve come a long way” she finished, in reference to a specially commissioned and visually stunning promotional video for Tourism NI, about the 148th Open.

The next speaker was Michelin starred chef and restaurateur, Michael Deane. Michael, who was recently accoladed with ‘Irelands Hospitality Hero’ by the Georgina Campbell Guide and the most recent recipient of the ‘Outstanding Contribution to the Industry’ at the Institute of Hospitality Awards for Professionalism 2019, inspired students by telling one story (amongst many!) about how he landed his dream job at age 18; having slept rough in London for a number of nights, having left these shores to seek his fortune – he happened to be in the audience of a lecture, given by Anton Mosimann, to future chefs. Michael waited until a break in the conference and noticed Mosimann was going to visit the bathroom so he followed him and begged him for a job… he was initially unsuccessful but 4 years later, he was invited to begin working in the Dorchester under the tutelage of Anton Mosimann, his culinary hero! Michael has held a Michelin star for over 18 years consecutively and is a hugely respected chef in the UK. He finished with a few key messages, “seize every opportunity, don’t ever give up, and make sure you travel so that you can develop – but make sure you return home too as we need you!”

Following lunch, kindly provided by industry supporters; Henderson’s Foodservice, Irwin’s Bakery and Coca Cola Hellenic the students visited the employer stands and were then invited back into the room where they heard the story of Trevor Annon, Managing Director of Mount Charles; Trevor told the students about the modest start to his career and how he launched his business with no financial investment from anyone and with very little savings of his own. After several years working in the contract catering industry, Trevor became passionate about creating a company that would be able to compete with the multi-nationals while retaining the core values and approach of a locally owned family organisation. From small acorns grow mighty oaks, and from a standing start in 1988, Trevor grew the company to a force to be reckoned with in the industry, and one that now employs nearly 2,000 people and has an annual turnover of £40 million. Trevor’s key message was “take a chance, be confident in your own ability and work hard”.

Neil Devlin, GM of Hastings Everglades Hotel spoke about his career journey. Neil told the students “you’re allowed to make a thousand mistakes in your career, just don’t make the same one twice” he also emphasised the need to “learn from others, watch and observe the star players and play to the strengths within your team”.

I am confident that the event encouraged and inspired undergraduates that talented people rise fast, if they have the right attitude. Events like this help to get the message out to young people that the hospitality industry has changed for the better over recent years. Working conditions are improving, including better working hours, and rates of pay. If we want our hospitality industry to thrive, we need to make it an attractive career prospect for young people. We have a duty of care to create pathways to match skilled students with the right roles in a sector that so desperately needs them. Our inspirational speakers brought insight and wisdom to the day and all talked about the importance of working hard, seizing opportunities, showing passion and going the extra mile.

One of the most coveted award categories at The Institute of Hospitality Northern Ireland Awards, which take place in May 2020, is the Student Management Potential Award. With the calibre of students at the conference, we are certain that there are a lot of strong contenders.

Find out more about the IoH Northern Ireland Branch.

Find out how to become a student member of the Institute of Hospitality.

Register now to attend Passion 4 Hospitality 2020, our student and graduate conference and careers fair taking place in London on 9 March 2020.