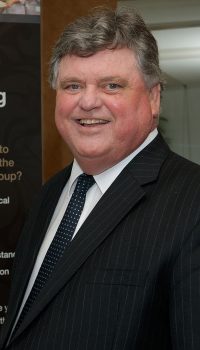 Peter Brend Senior, Director of the Brend Hotel Group, has died at the age of 61.

The youngest of five children born to entrepreneurs Percy and Florence Brend, Peter was born in Barnstaple and spent his whole life living in the area. After attending what was then Roborough House Primary School in the town, he went on to secondary education at Grenville College in Bideford.

Aged sixteen, Peter left school to start work as a trainee mechanic at Taw Garages, one of his father’s businesses. Three years later in 1977, when Peter was 19, his parents added the Saunton Sands Hotel in Braunton to their growing list of hotel purchases and asked him if he would go and work there instead. He agreed and spent the next nine months working alongside the existing manager.

“Dad told me exactly what to do,” he later recalled in an interview. “He told me to say hello to the customers, to always check the till and to make sure nothing went out the back door.” When the manager decided to buy his own hotel within that first year, Peter was left in charge.

It was a considerable responsibility for a young man but, with the help of his older brother John who was busy running four other hotels at the time, Peter soon learnt what he needed to do to keep customers and staff happy. With weekend breaks heralding a different sort of tourism, he also helped turn what was initially a seasonal business into profitable, all year-round trade.

Highlights of Peter’s hospitality career included launching the Brend Group’s Apprenticeship Academy and winning the AA Hotel Group of the Year title in 2015.

As director of one of the South West’s largest and most successful companies, Peter believed in treating employees as extended family and, widely respected, was known as a generous, hardworking, understanding and very fair boss.

James Pellow, who has worked at the Royal Duchy Hotel in Falmouth for 34 years, remembers meeting him for the first time just three days in to his new job. “I never expected him to know who I was, let alone seek me out,” he remembers. “But he made a point of finding me, introducing himself and saying that if I ever wanted to speak to him, I should just ring.”

Shaun Sanders, Deputy Manager at the Saunton Sands Hotel where Peter was based, has similarly fond memories.

“Mr Brend Senior gave me a chance 21 years ago. With his guidance and massive heart, I went from being a young 16-year-old boy to the man I am today. He was not just my boss, he was my role model and it was a genuine pleasure working for such an outstanding, inspirational person.”

A doting family man, Peter is survived by his brother John, his sisters June and Patsy, his children, Peter, Michael and Hannah, partner Kirsten and his 9 much-loved grandchildren.