Entries open for The Roux Scholarship 2020 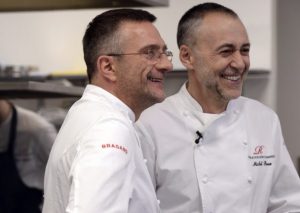 The Roux Family are delighted to open the Roux Scholarship 2020 for entries, inviting young chefs to test their fish filleting skills by submitting a recipe using hake, clams and leeks.

Chairman Alain Roux said: “This year, the competition is showcasing MSC certified hake, a beautiful, sustainably sourced fish local to our shores in the UK. It is similar in looks and habitat to cod, its more popular cousin, but has a milder flavour, softer texture and smaller flake. A surprisingly underrated fish, hake finds its perfect accompaniment in palourde clams, a particular favourite of mine along with deliciously delicate leeks. As usual, we are setting a deceptively simple task, using three ingredients whilst testing core skills to the limit. The key to success will depend on precise judgement to ensure a subtle balance of flavours whilst taking care not to overcook any element. I can’t wait to see what our ingenious competitors produce for us this year”.

Chairman Michel Roux Jr said: “Hake is such a delicate fish, it needs the utmost care and attention when cooking so I’m really looking forward to see what the chefs come up with. Clams and leeks are the perfect accompaniment but there is lots of scope for bold flavours with the sauce and the second garnish.”

Entrants must be in full-time employment as a chef in the United Kingdom and be aged 22 or above, but
no older than 30 years of age on 1st February 2020. They have until midnight on Friday 31st January 2020 to submit a recipe to serve four people using:

One whole fresh MSC labelled hake, gutted, weighing anywhere between 1.6kg – 1.8kg (maximum 2kg) and 600g live whole grooved carpet shell / palourde clams (ruditapes decussatus); together plated with two ‘simple’ or ‘composed’ garnishes/accompaniments. One of them must include leeks and the other to be a garnish/accompaniment of the applicant’s choice. One of these can be served separately if preferred. A sauce must accompany the dish.

Up to two and a half hours’ cooking time is allocated at the Regional Final for cooking the dish, as the recipe originally submitted and a dessert to serve four people made from a ‘mystery box’ of ingredients given on the day.

Entrants are not allowed to use or bring any pre-prepared stock or sauce whatsoever for the fish, vegetable or garnish / accompaniment dishes and none will be provided.

The use of caviar, truffles or foie gras is not permitted.

The judges will look favourably at efficient use of waste and leftover ingredients during the course of preparation.

A maximum of two photographs may accompany entries, if applicants feel these will enhance their entry. This is not obligatory.

Full details of the competition, rules and the entry process are available on the website www.rouxscholarship.co.uk which entrants must read before entering.

About the Roux Scholarship
In 1984, Michel Roux founded the Roux Scholarship with his brother Albert to enable a new generation of chefs from Britain to train in the greatest restaurants in the world. Not only has it become the industry’s most acclaimed chef competition in the UK with many scholars having gone on to win Michelin stars themselves, it ranks among the most prestigious competitions for chefs in the world. Since it was established more than 30 years ago, it has helped British chefs gain the international recognition they deserve. With many young chefs entering the competition each year, thousands have been inspired, and lives changed, by the experience of competing.

Prizes
The winner receives £6,000, to support their career development and an invitation to cook and train under the supervision of a leading chef at a prestigious three-star Michelin restaurant anywhere in the world for up to three months. This is in addition to a host of fabulous prizes from sponsors.